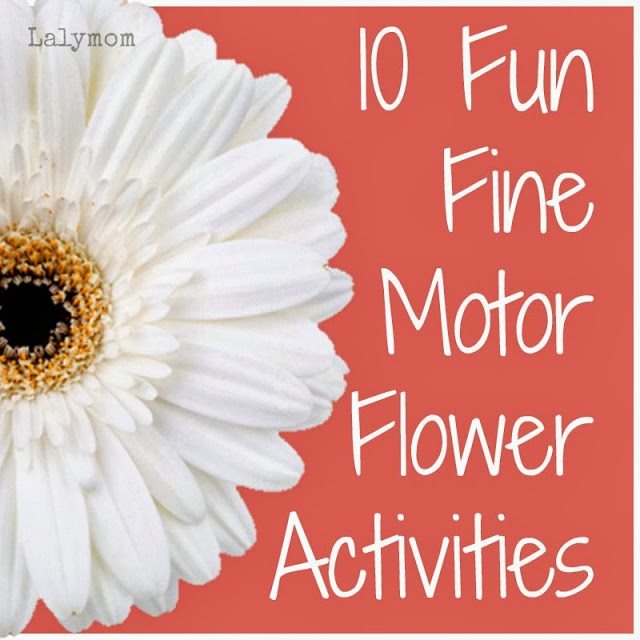 Hooray, today is the very first Fine Motor Fridays Post! I'm so excited to team up with four other awesome kid bloggers- Craftulate, And Next Comes L, Stir the Wonder and School Time Snippets– to bring you new fine motor activities every Friday in October! We each had different backgrounds before becoming mothers and bloggers so I cannot wait to see what everyone comes up with. And without further ado, here is what we have to offer this week!

A week after my birthday there is ample evidence that I did not inherit my dad's green thumb…a sunny beautiful arrangement of flowers was already wilting, with some flowers in better shape than others. My 3 year old has had a lot of fun lately exploring different materials to cut with her scissors, so rather than toss the flowers I figured it might be fun to let her cut the flowers and petals.

This started out as solely a scissors activity. She really enjoyed playing with and manipulating the flowers though, so we just kept coming up with ways to use them! It turned into a whole day of fine motor activities with some great pretend play sprinkled in!

Next time you have fresh flowers in the house, consider letting your kids explore and play with them, you will probably be just as surprised as they are at what they come up with! Our activities were done over the span of a whole day, none were rushed, and I only changed or added elements well after she had moved on from the last activity. I didn't feel the need to push anything on her, it just worked out that she really enjoyed working with the flowers. Of course always be sure to supervise your child when handling scissors or materials that should not be swallowed. Also keep an open mind about your child's capabilities and adapt as you go along!

Like I said, we did start out with the scissors. My daughter learned right away that it was much harder to cut the stems than the petals. But she could pick up the flowers by the stem using her scissors, which made her ooh and aah a bit.

She kept asking to put the flowers back into the arrangement, which would have been great fine motor practice but there were a lot of greens and flowers blocking her view of the foam in the vase, so I thought it would be better to have different container to poke them into. I took a ramekin and added some spent coffee grounds to be used as dirt. She came back to add, remove and redo this “sculpture” as she called it, several times throughout the day and it was the one thing she to Daddy at the end of the day. She was very proud of her work here! 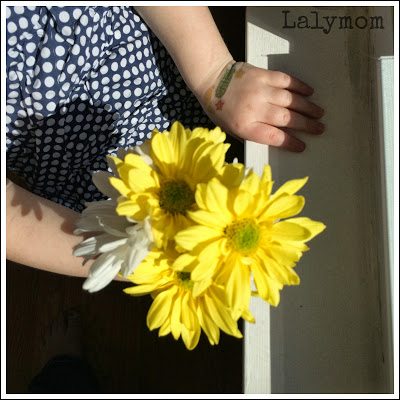 This was one of those moments where I felt like my baby was really turning into a little girl. It was a simple task that she wanted to do all by herself and it was the AHA moment for me when I decided we should get as much fun out of these flowers as we could. So one by one, she opened her hand to add flowers to her little closed fist to make a beautiful sunny bouquet. She just loved them! She looked at them so affectionately, hugging them, kissing them and telling me how much she loved the flowers. This was something really special for her to be able to hold flowers. It's something we just hadn't done. It also sparked the first bit of pretend play with the flowers, as she broke into song, using the flowers as a microphone. So darling!

She went off and played with the loose flowers for a while, using them as a microphone for her as well as her small animal toys. The animals also liked eating the flowers and using them as umbrellas. I even got to use one as an umbrella for a little bit! 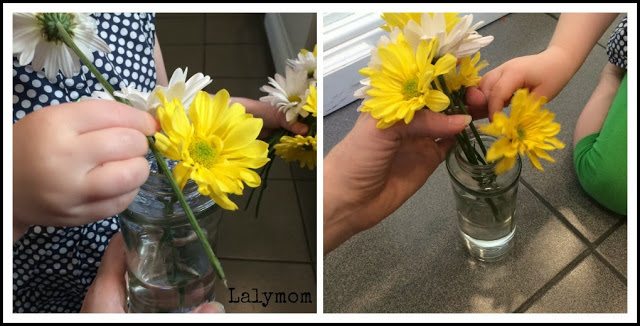 Once she seemed done playing with the loose flowers I asked her if we should put them in a vase. She was pretty excited to have a new place for the bouquet. She poked them each into a tall glass and then when she noticed that I hadn't added enough water, she even used a water bottle to pour water in. It's a small, simple task, but it's great to get to talk about how to take care of flowers (maybe the green thumb skips generations?) and to work on life skills like pouring. 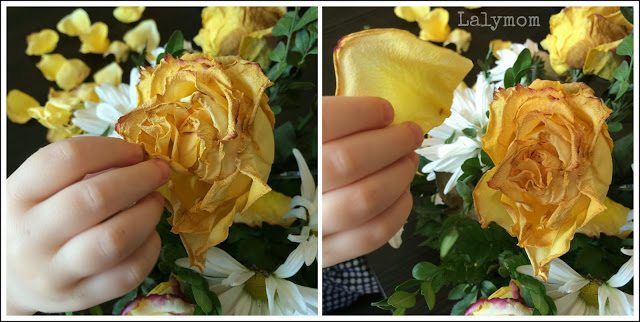 As Ladybug finished lunch I was sitting at the table with her and I thought of the old “He loves me, he loves me not” game. I didn't really want to introduce the possibility that I didn't love her though, so I asked her if she wanted to play a game called My Turn, Your Turn. We sat there quietly plucking the petals off the roses in the arrangement, back and forth, her turn, my turn. “Mom, I really love playing My Turn, Your Turn with you,” she said. Well, I can tell you the feeling was mutual. The bonus of course, is that all that plucking is great work for her little hands…and now we had a huge pile of lovely petals to play with!

Petal Pick Up and Dump 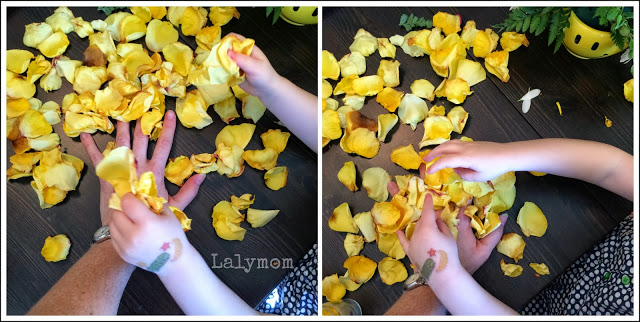 This activity is something I've learned over time that my daughter loves to do with any new material. When I slice strawberries over her plate, for example, she holds her hand out so they fall on her hand. She also loved feeling melty beads fall on her hand when we were putting them away, so now we make it a part of any sensory activity. We literally just picked up handfuls of petals and let them fall on each other's hands. It was important to hold them just right, my daughter learned, and not too tightly. We did end up with some squished petals but it was a good learning experience to adjust her grip to handle something so delicate.

One at a Time 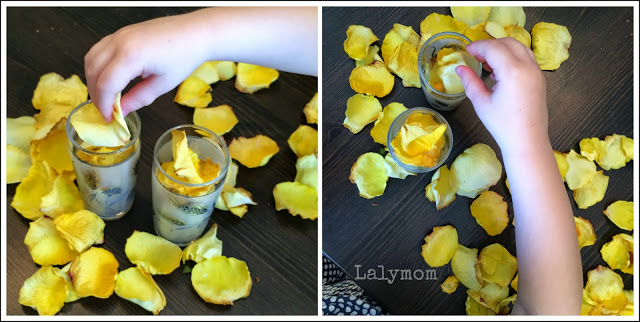 Next I got out a couple small glasses and told her we could play another game if she wanted. Of course she did! This game was called One at a Time. Pretty easy game. We just took turns placing one petal at a time into the narrow glasses. (I suppose we could have called this game My Turn, Your Turn as well, though!) The petals juuust fit into these glasses, so she had to concentrate to push them down just right. We also tried dropping them in, and she tried just jamming several in at once. It didn't quite work though, so we always went back to one at a time. (I guess the name DID fit!) 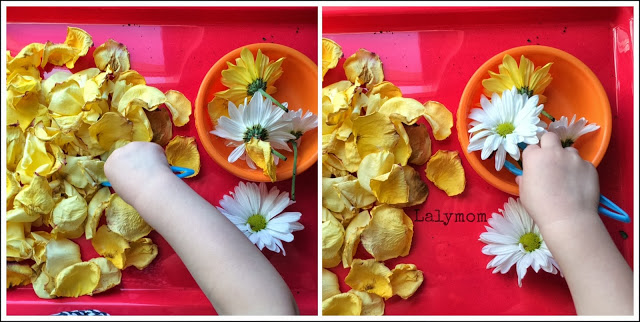 Every so often, Ladybug enjoys playing with these tweedlers that we got at American Science & Surplus last year. They are not in her every day collection of toys, which seems to make them extra special. I set them out on the tray just in case it would be something she'd like to use with the flowers and flower petals. She did. In fact, it prompted some Alphabet Soup cooking by the little chef. Lots of tweezing and scooping went into this recipe….just as I'd hoped! 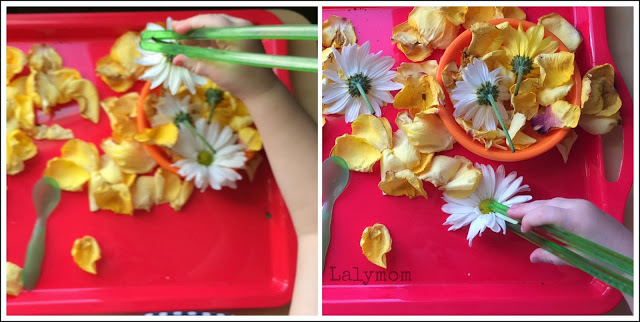 Okay maybe this doesn't deserve to be a whole separate item from the tweezing, but it is a different hand grip to use chopsticks- even these animal tipped “cheater” chopsticks. I recently found these for sale individually in the US Toy store near us. (Note: I could not locate them on their website, but here is the whole set on Amazon.) We have a shark one and a dolphin one. Both have made several appearances in the bath tub as well as various “land-locked” activities. She is pretty good with the tweedlers but the chopsticks are still new and even for me they are a bit tricky. In fact you can tell by the blurriness of the photo above that I was a bit distracted…she had worked reallllly hard to try to pick up one of the flowers by the stem. I was so excited for her when she succeeded that I just about missed the photo opp. After transferring flowers and petals for a while she decided that the shark (sorry, you can't see him but he is on the end of the chopsticks, keeping the sticks together) was hungry and wanted to eat some flowers, and then he had fun hiding in the petals for a game of Hide and Seek.

We had moved on to other things during the day but the flowers were still out before dinner time so I thought we'd try one more thing if she was interested. I wanted to see if we could lace or thread the petals. Lacing a flower petal, whether dry & crispy or not, proved to be a tricky thing. What we found worked best was pipe cleaners, or chenille stems. These work nicely because the wire is the only thing that pokes a hole, and the fuzzy fibers slide through easily. Ladybug thought this was “pretty cool” and sat very still and quietly while working on this lacing. Afterwards she said she made be a beautiful necklace- pretty cute, wish it fit!

Well that's it for us! Have you ever played with fresh flowers? What kinds of fun have you had with them? I'd love to hear about it- playful ways to learn and develop are always fun to read about! Speaking of which… 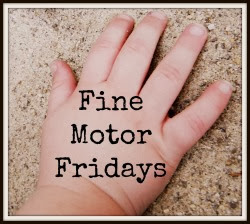 As I mentioned above, this post is part of a month long series called Fine Motor Fridays. Every Friday in October, you can head to Lalymom and the 4 other lovely blogs below to find a new fine motor skills activity! Pencil in some extra time though, because my co-host's blogs are chock full of amazing and inspiring activities for your kids! I've found loads of fun activities for both my 3 year old and my 1 year old on these blogs. If you're not following them already, you should surely check them out!

We hope to see you next Friday for more Fine Motor Fun! I'll also be sure to pin each of our posts to my Fine Motor Fun Pinterest board, so check that out for more inspiration! Thanks for coming by! 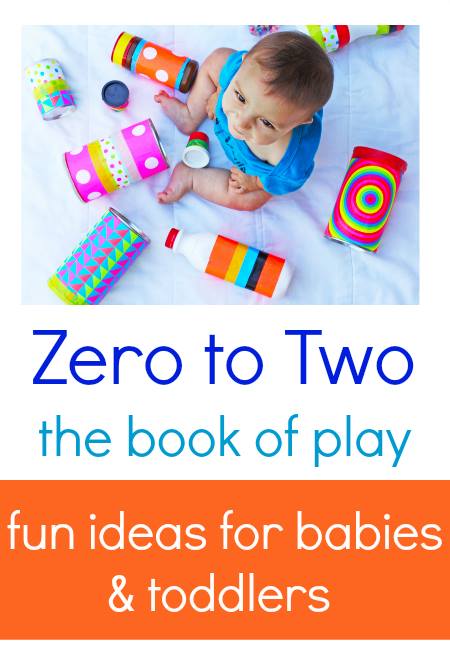