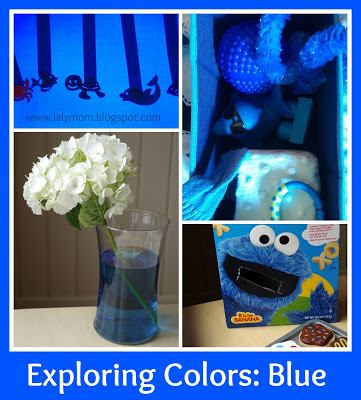 We have been following along with Play Create Explore as they focus on a different color each week. If you want to take a look back at previous weeks that we have participated in, they are Red, Green, Black and Orange. This week we have been Exploring the Color Blue. Here are some activities we did to explore MY favorite color at our house: 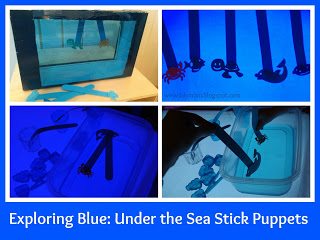 Exploring the Color Blue: Under the Sea Stick Puppets

We started by using some foam stickers to make these little stick puppets. I only tore off the paper backing where the stick would go so that they didn't stick to everything else. Then I cut out a slot on the top of a shoe box and was going to drape a blue cello sheet across the front but it was too small so I cut a piece out of the back. We made the fish swim in the shoe box sea for a little while but not as long as I thought. Ladybug decided she wanted to make them swim on the light box so we brought them over. Then I thought, why don't we actually make them swim in real water, so we did that for a while and that was her favorite part. All of a sudden the fish puppets were being given names and interacting as friends. Ta-Da, fun times! 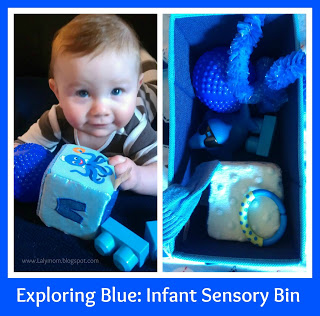 Sensory baskets and bins are a popular thing on the interwebs these days but I hadn't really done too much of that except when we went on a color scavenger hunt and showed Little Big Man what we found. This time I put things together- on purpose- just for him. There's a neat idea, entertain my other kid too! He enjoyed the blue lei the most but obviously this is not something I let him have when I am not around. Overall I hope to do more themed play ideas for him as he gets better at sitting up. 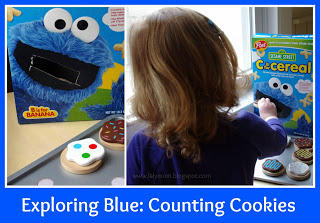 Post cereals recently introduced a couple new cereals branded with Sesame Street Characters and I have to say, looking at the nutrition panel I was pretty impressed it was not loaded with junk. I'm planning a separate post about it actually, including a small giveaway, so hooray for that! But as we were thinking of blue activities I thought of this box with a perfect Cookie Monster face on the front. I considered using it as a mask or cutting it out and dressing up the light box as Cookie Monster but we went a simpler route this time. I cut a hole in his mouth and we used it as a fill-and-spill type of game along with some Melissa and Doug Cookies. We have used it all week. First we just acted out giving him cookies, she likes it when I talk with his voice (okay, I like it too!). Then we used it for counting. Next I cut a hole out of the matching Elmo cereal box and we used it to practice sharing and taking turns. The most giggles came when Cookie Monster and Elmo kept insisting that the other one get the next cookie. I can see many more days of play inspired by these cereal boxes! 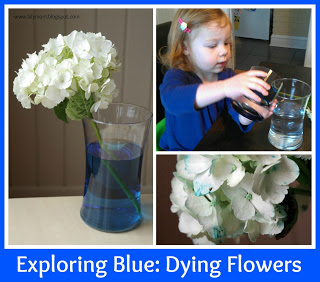 Ladybug and my husband brought home some flowers from the grocery store last weekend and since it included some white ones I thought it would be fun to try to dye one blue. I added food coloring to some water in a glass and had Ladybug pour it into the vase and add the flower. We checked it every day and compared it to the other ones in the original arrangement. And… very little had changed. The centers of each flower were light blue and each day we would see more flecks of blue. I kept adding more and more food coloring each day. Finally after a week many of the petals had tips of blue and there was a very slight shade change overall. Next time I will know to start with more food coloring, or perhaps try adding lemon lime soda and bleach, which I learned about when trying to troubleshoot. Still it was fun to go check on them each day and spot the differences between the regular and the dyed ones…actually it was totally intentional that the changes were so slight…I wanted to improve her attention to detail…yes that's right! 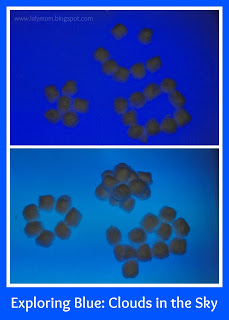 Exploring the Color Blue: BYOC: Bring Your Own Clouds

I thought it would be lovely to lay in the grass this week and find shapes in the clouds. Mother Nature had others ideas though so we made our own! We made shapes out of cotton balls on the   multi-colored light box and talked about light blue skies during the day and dark blue at night. I also know that I need to bone up on cotton ball shape making…sheesh! She was asking for a lot of things that were hard to make! The ones in the pictures are the ones we were able to do together- happy face, circle, rectangle, flower and just a plain old cloud.
That is pretty much what we did. Ladybug doesn't have blue clothes, aside from jeans and we eat blueberries every single day. If we had better weather it would have been fun to watch clouds but another day!
Thanks for stopping by! If you enjoyed our blue activities take a moment to share them on facebook or pinterest!

I've been asked to add a post on the very fun Family-Focused Monday Blog Hop…check out the other blogs taking part! 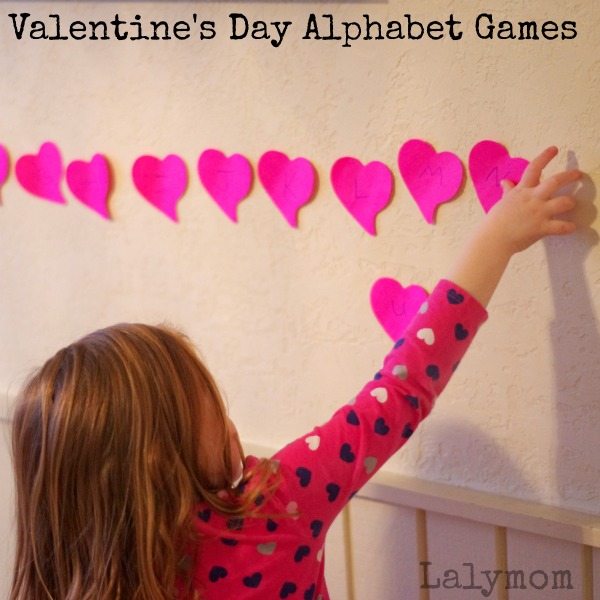 Welcome back to another Read and Play Blog hop hosted by the Pleasantest Thing! This month’s Book Activities for kids are fun Valentine’s Day Alphabet Games! Today we set up some super fun games to go along with a cute little book that we received as a gift. It started as just one game but… 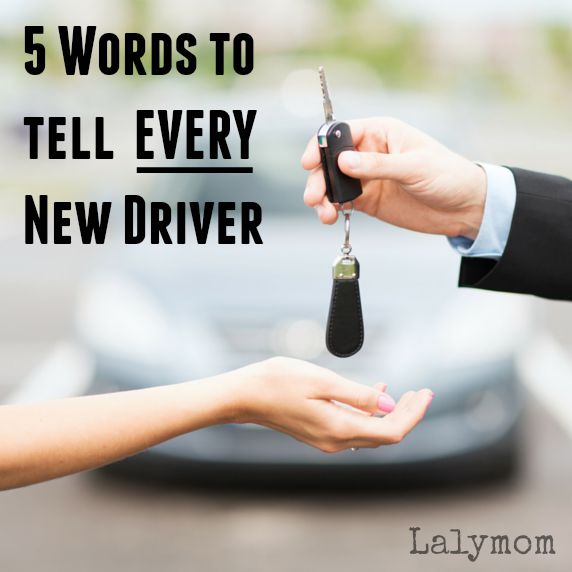 Today’s post harkens back to my own high school years but is equally relevant to my current life. It shares 5 words to tell every new driver. It probably feels like Driver’s Ed but that’s okay with me! File it under Tips for New Drivers but really it could help any driver! Every years scores of teens…

Yesterday I shared with you a super fun Tinker Bell Slippers Tutorial that my daughter thought of and today I would love to some super cute Tinker Bell and the NeverBeast coloring pages and Printables! These free printables and coloring pages were graciously shared with me by Collective Bias and Disney in connection with the new…

I have been desparately wanting to sew something- ANYTHING- successfully with a knit fabric. I have tried and given up on 3 prior attempts. I feel like I just won an oscar though because I need to thank the academy of amazing and helpful sewers who by way of blogs and other online postings helped… 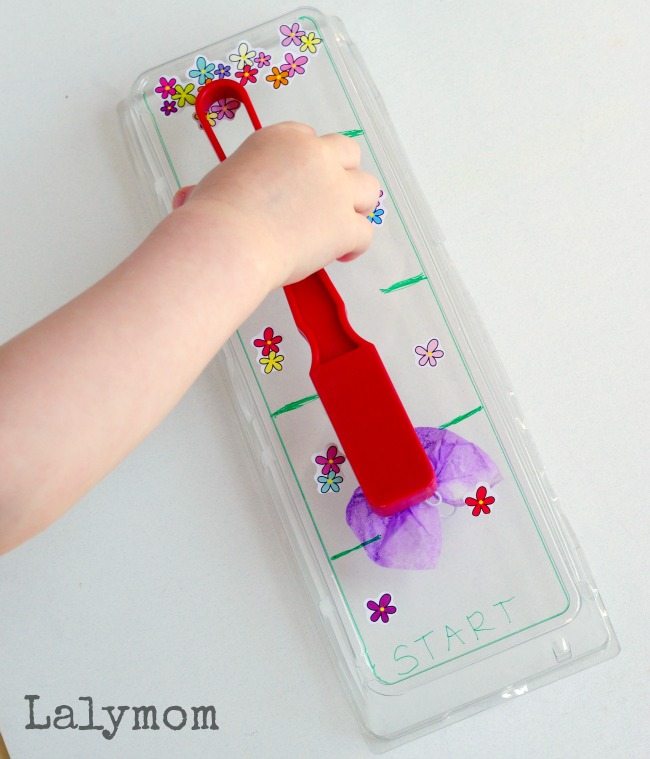 Hiya! It’s time for another Fine Motor Friday! Today I’m sharing one of our Spring Activities for Kids with this Easy Butterfly Magnet Maze. I’ve got a couple affiliate links in there in case you want to order the supplies. We like our recycled crafts in our house and use quite a lot of materials…

Today’s craft is perfect for fitness tracker users of any kind. These Step Count Sticks are great fitness motivation whether you just need an idea to help get those last few steps, or you want to crush your challenge opponents! I’ve got a free printable for you as well as some affiliate links for easy…