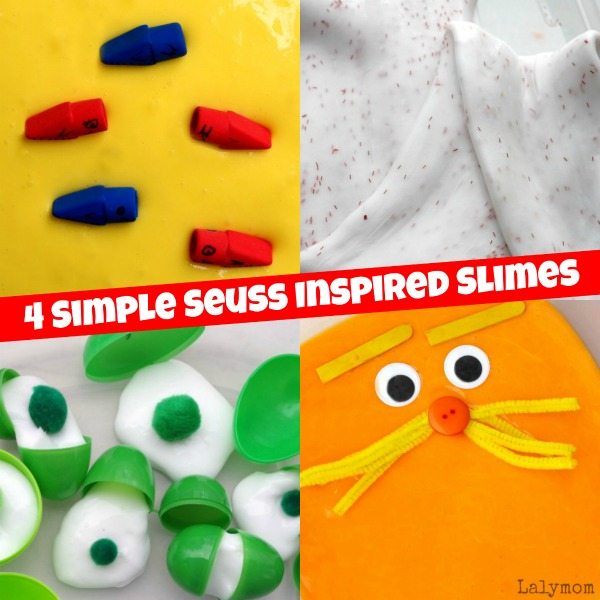 About all things Seuss: the good doctor, I say!

Yesterday we made Seuss Dominoes and before that, 3 Lorax Crafts.

But if you think we're done with with Seuss, sit back and relax!

Today we share 4 slimes, you see, 4 slimes inspired by 4 books.

So pull up a chair, take a seat, grab a coffee, have a look!

Featured Books: One Fish Two Fish, The Cat and the Hat, The Lorax 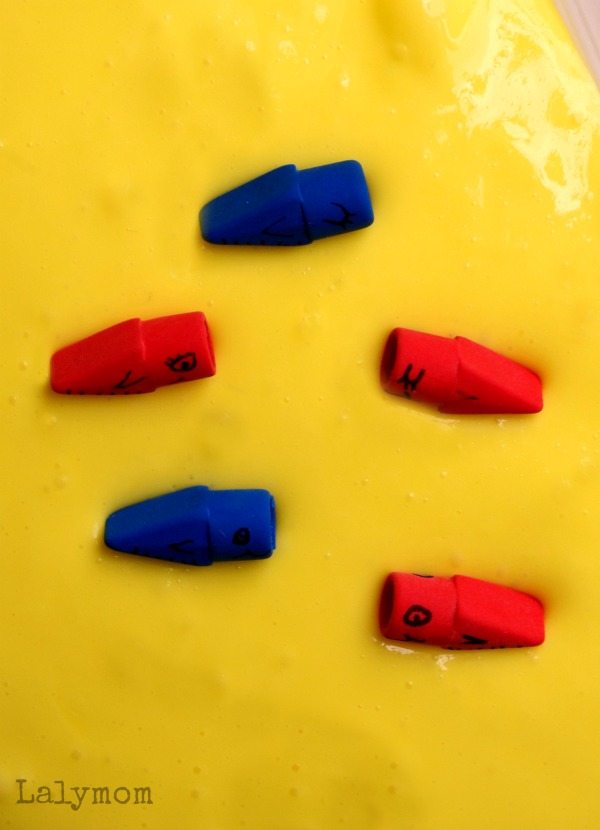 We used the Steve Spangler Borax Slime recipe this time, which is a little different than slimes we have made before in that you rinse the glue bottle. So, good times!

There was still a dicey moment with this one where I had to consult Asia Citro's Slime Fail post but we got it under control. Phew!

We colored ours with washable liquid watercolors. It didn't take much yellow to get it this bright. I mixed the color into the glue before adding the borax.

When it was done, we added some red fish and blue fish, which was just some pencil top erasers, which I drew fish faces on using Ultrafine Point Sharpie marker. 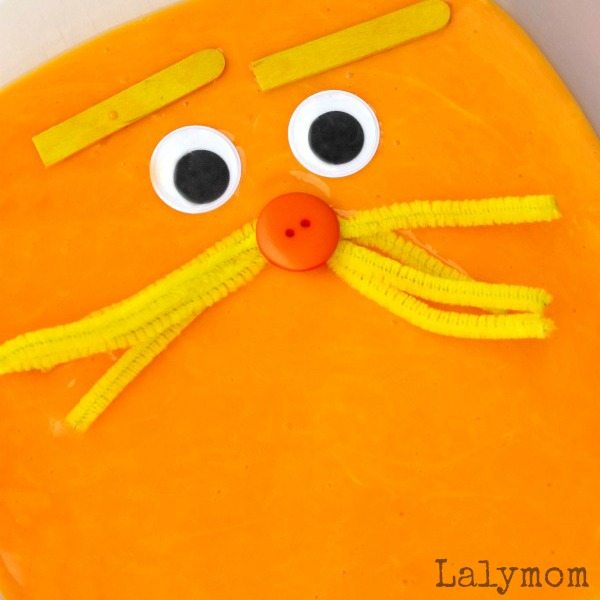 This was a fun one, but here is a quick note about slime glue brands. For these slimes we used three different brands of glue that we had on hand. Elmer's School Glue was the best. Staples store brand was fine but a little less elastic and stretchy while the two pack of dollar store glue that we used for the Lorax slime was totally…not  good for slime. It ended up fine in the end because I added some Elmer's that I found in a random drawer, but otherwise this slime would never have held together. It was like orange pudding.

So. There you go. Use Elmer's and buy a gallon of it!

For this one we used orange liquid water color mixed with the glue, then completed the recipe. We added yellow pipe cleaners, googly eyes, buttons and colored craft sticks cut in half.

Cat in the Hat Sparkle Slime

I didn't quite know what we should do for the Cat in the Hat and I asked my daughter what things make her think of the Cat in the Hat and she said red stripes. We could have done red pipe cleaners or ribbon I suppose but we had some cool red holographic glitter from our friends at CraftProjectIdeas.com that is like little red glitter stripes so we added that to our white slime.

Now we tried to incorporate the glitter into the slime after mixing up the slime. I'd say….I don't quite recommend that method hahaha. We had about as much glitter on our hands as we got kneaded into the glitter.

But it was still fun and pretty, not to mention good work for our hands! 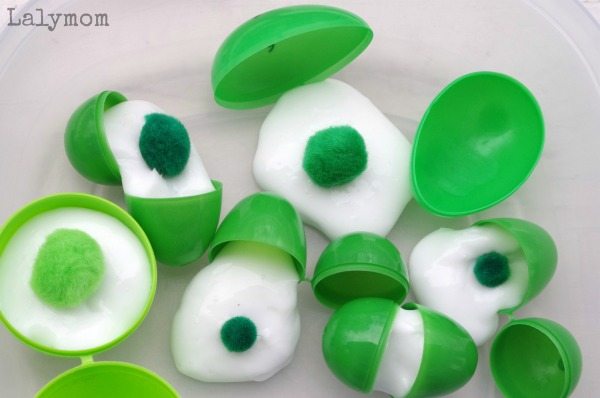 Green Eggs and Ham was not one of the selections this month but I was making white slime for the Cat and the Hat Sparkle slime so we used it to make green eggs too!

If you liked these Dr. Seuss Activities with Slime please do pin it and check out my other Seuss-inspired posts as well as those from my Virtual Book Club for Kids co-hosts below! 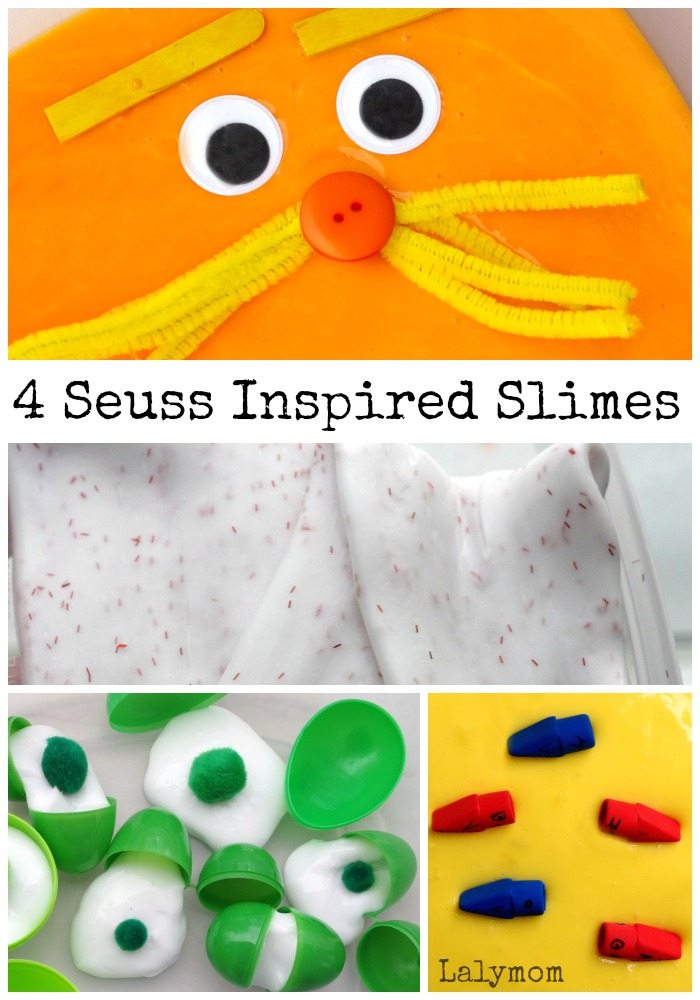 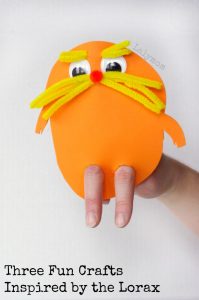 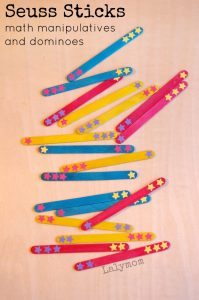 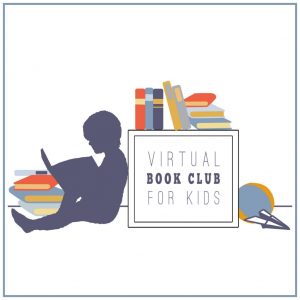 This post is part of the Virtual Book Club for Kids which means there is a host of other awesome bloggers who shared super fun ideas based on these books too!