Today I am joining a group of bloggers in sharing A-Z Science Experiments for kids, hosted by Jaime of Frogs and Snails and Puppy Dog Tail. We chose Q for Quicksand for these density science projects for kids! Note- there are a couple affiliate links used in this post. 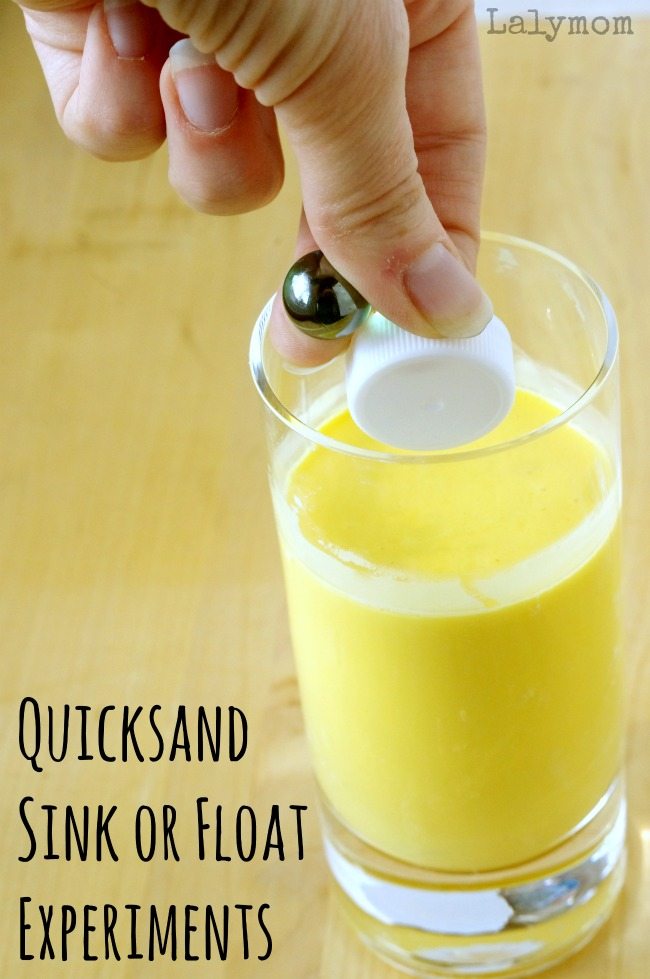 When Jaime opened up this series, we were asked to pick a letter and share an experiment that went with that letter. Something made me focus on Q and wonder what on earth a person would pick for Q. Qu…qu…Quicksand? I thought? What could we do with that?

First off I knew that it was a non-Newtonian fluid. I know the kids like playing with non-Newtonian fluids from our Glowing Oobleck days so I wanted to see if we could do an experiment with it. I also knew vaguely of the whole “the more you struggle in quicksand, the faster you sink” thing. I wondered if we could demonstrate the properties of quicksand in a safe way.

An idea popped into my head- “I should demonstrate the properties of quicksand by showing a Hexbug sinking faster when it is turned on!” It kind of turned into a Quicksand sink float experiment, if that makes sense.

My kids and I get a kick out of sink and float activities- one of our favorites was seeing Cookie Monster's Sink Float Interactive Experiment recently.

So we set the whole thing up, made the oobleck and then, and only then did I think, “What kind of crazy pants is going to submerge Hexbugs into oobleck?!”

So we tried it anyhow. I can't say for sure how much submersion a Hexbug can take but I can tell you that ours survived about 6 sinkings! So sink Hexbugs at your own risk but….it was fun!

Our findings led us down a whole different path though.

Here is the play-by-play. The black one is switched on, so it is vibrating, like the struggling person in quicksand, while the pink one is off, like someone laying still in quicksand. 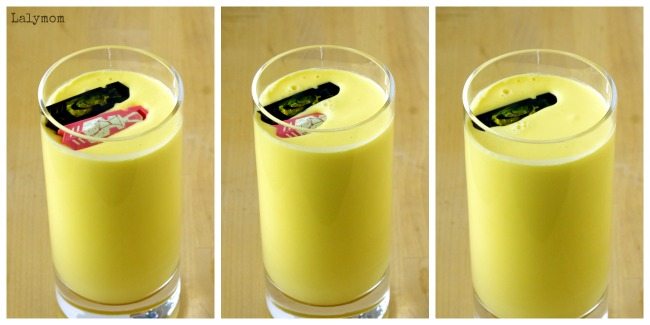 So. I'm not sure if you caught that but the exact OPPOSITE of what I was expecting to happen actually happened.

That is when I went researching and now, for like 30 seconds, I'm a super expert on this. If you don't really care too much about the difference between oobleck and quicksand, just skip down to the next section. If you want to learn more about the fascinating distinction between these two fluids, read on my friend.

Oobleck Vs. Quicksand: The Same and Yet the Opposite

Some of you out there are still mad at me for submerging Hexbugs, but our super-science-savvy friends out there are saying, “Umm but wait, oobleck and quicksand are not the same, Lalymom!” (italics=snooty voice) And they would be correct and incorrect at the same time. (Same voice back, so there.)

First off, if you google “how to make quicksand” most of the results you find actually give you the directions to make oobleck, which is a mixture of cornstarch and water. And many of the explanations of non-Newtonian fluids mention either quicksand, oobleck or both. That is probably because they are both in fact non-Newtonian liquids. SAME! So THERE! Ha-HA!

I think this is why it gets confusing when you research it…because if you stop at the fact that they are both non-Newtonian fluids, then it sounds like they should behave the same way. The thing is, there are different kinds of non-Newtonian liquids. So the plot, and the oobleck, thickens!

Basically oobleck is a type of non-Newtonian fluid called a shear thickening fluid. So when left alone it is liquid but when you stir it up it thickens to a solid. That is why the vibrating Hexbug sank slower than the still one- it was making the oobleck turn to solid which kept it from sinking. It just was not moving enough to keep the obleck below it from staying liquid, so it DID sink, with a bunch of oobleck stuck to it, being kept solid by the vibrations.

Quicksand on the other hand is a kind of non-Newtonian fluid called shear thinning fluid, which is solid when left alone, but when you stir it up it thins to a liquid, which is why you start to sink when you struggle in it.

Oobleck and quicksand are total opposites within the same crazy, logic-defying category. Holy cheese and crackers!

So there is the quick version. Here is a more thoroughly scientific discussion of oobleck vs. quicksand.

Oh well. While the Hexbugs recooped and dried out, we still took turns guessing if things would sink or float and since they knew how tricky the oobleck is it was fun to talk about.

So here is what you will need for some easy science experiments using (a non-Newtonian fluid that many people call) quicksand (but if you want to get technical about it, it's totally not. Ahem.)

Cornstarch
Water
Object of differing sizes, shapes and weights (penny, marble, milk cap, etc.)
Mixing bowl
A clear, narrow container (the thinner the better as long as your items will fit into it. This will allow you to see the objects falling, we pressed our items up against the side of our glass but we could only see bits of them.)
Hexbugs if you want (still at your own risk…also, still fun)
Paper and pen to record your hypotheses and observations
Food coloring (optional)
A sink to wash hands and items as needed

Make your  I mean quicksand by adding 2 parts cornstarch to a bowl (add food coloring if you like) then add 1 part water. Mix and knead with your hands until totally combined. If you try to pick it up and it feels like a solid and then it looks runny when you are not touching it, then you're good to go.

Place your oobleck into the tall narrow container.

Draw a chart on your paper. List your items on each row going down the chart. Across the top you will have a column for each person's predictions, plus one more column for the result.

Go through your list first and record everyone's predictions in the chart for each item using S for sink and F for float. Will it sink or float?

Take turns dropping items into your oobleck (you can fish them out one by one or collect them at then end but fishing them out is a challenge! I'd suggest grabbing the Hexbugs right away, if you use them, rather than let them sit until the end. 🙂 )

Record your results and talk about why certain items sank and others floated. (Spoiler alert: if you are looking for something that will float, the plastic cap in the top picture, placed flat side down totally floated.) You can discuss the density of the oobleck and the objecks, the viscosity of the non-Newtonian liquid and the mass of the objects. Head over here for mathematical equations for sink float experiments.

–Make actual quicksand and compare results for the same objects between the two
-Race 2 items by dropping them in at the same time to see which sinks faster
-Compare the results of the oobleck sink float to other substances (water, soda, juice, salt water, etc)

If you try this science experiment, let me know how it went in the comments! Please pin to share if you liked this idea and be sure to check out my Glowing Oobleck, Two-Ingredient Glowing Slime and Rainbow Ice Tunnels posts too! 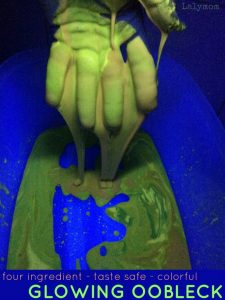 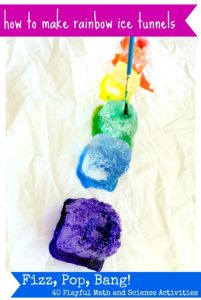 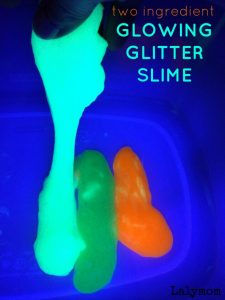 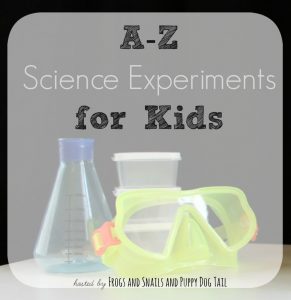 For more great science project ideas head on over to Frogs and Snails and Puppy Dog Tail for a Science Experiment Idea for every letter of the alphabet! It is a month long series, with a new idea added every day by a top kids' blogger! Head on over and see all the fun ideas!

SCIENCE ON THE BRAIN?! If you are looking for fun STEM activities for kids, come check out Fizz, Pop, Bang! Playful Science and Math Activities! This eBook is chock full of approachable activities, step-by-step tutorials and inspiring photographs from some of the top kids bloggers from around the world! There is an subject-based index that helps you select the perfect activity based and many of the activities are perfect for multiple siblings of different ages to do together! Learn more here! 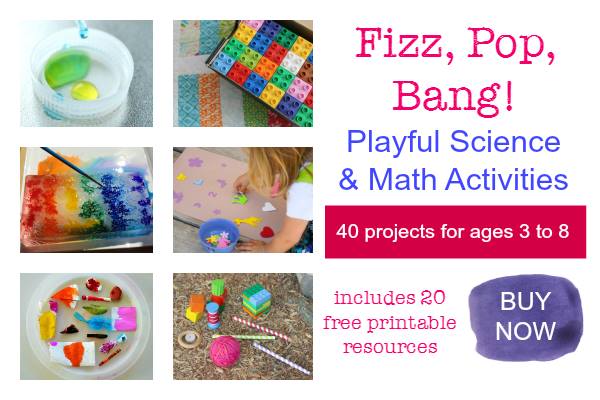