Today we are sharing our itinerary for a Disney, Universal Studios, Legoland trip. Inside you will find travel plans, tips on where to stay and in what order to visit each of the Florida theme parks. This post contains affiliate links to our favorite goods and services, which means that if you click through and take action we may receive a small commission. 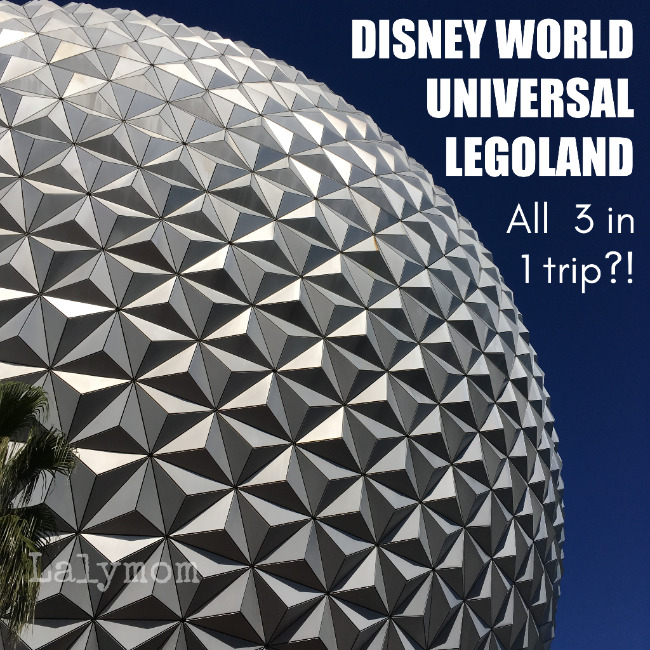 Last spring it was time to start thinking about summer vacation planning for the family.  We’ve taken several trips with the kiddos including beach trips to the Charleston area, trips to California and even trips overseas.  Given our children are of that age (6 and 9 as of the date of the trip) one of the family favorites has been to Disney World although we had done that a couple of times.

To add to it, our daughter (the 9-year old) has been in a pretty solid Harry Potter phase and has been lobbying to get to Universal Studios to visit the two Harry Potter themed areas there.  Also, our son (the 6-year old) is, like many kids of that age, a Lego fanatic. We had gone to Legoland in California a couple of years ago and he loved it.

Then it occurred to me, guess what Florida has all three of?  That’s right Disney World, Universal Studios and Legoland!

Was it possible to squeeze in all 3 of those to a single vacation? Maybe… ?

Is that just insane? Probably….?

But coming from Illinois, we would have had to pay for airfare again to visit whichever park(s) that we didn't get to on this trip, and who knows when that would be.

The idea of what was soon to be known to our family as Disn-ego-versal (Disney, Legoland, Universal) was hatched.  Ultimately we ended up with a 10-day trip (we left Friday afternoon and came back on the following Sunday).

This was the travel plan we used to visit Disney World, Universal Studios and Legoland, all in one trip.

So, needless to say, this is a lot.

Luckily, our family has a master trip planner: LalyDad. If you had told him even 5 years ago that planning Disney vacations would be one of his favorite hobbies, he would never have believed you but, here we are!

When planning a trip of this magnitude, a few things we had to consider were:

Let's walk through each consideration to help you plan the Florida Theme Parks vacation of a lifetime!

Where to Stay for a Disney World, Universal Studios and Legoland Vacation

There are a wide variety of opinions out there on where to stay for each major Florida theme park.

Some people like to stay off site so they can have a larger place (a condo with a kitchen, etc.) which allows them more space, the chance to have quick (and cheaper meals), etc.

Others like to stay on site to take advantage of the perks offered by the parks, the convenience of getting to the parks (as compared with driving and parking or shuttle) and the whole immersive experience.  Finally others like to pick one place (Disney or Universal) to stay and to drive (or cab/Uber/Lyft) to Universal.

In this case you also have to decide- should we stay at one place for the entire trip, or change hotels?

Where to stay around Legoland

For our trip, the real wildcard was Legoland. Disney and Universal studios are relatively close to each other, but Legoland is farther away.

Universal Studios is the closest to Orlando, followed by Disney World (about 10 miles away) and then Legoland is way down in Winter Haven (35 miles from Disney and 45 from Universal).

Couple that with the fact that, if your kids are into Legos and the rides at Legoland, you probably want to spend more than a day there.

As such, I knew that was way too long of a drive to do more than once so we were looking at staying two places at a minimum (one near Disney/Universal and one new Legoland).

For us, given we were planning two days at Legoland, the choice of where to stay was an easy one. We feel that you cannot beat staying at the Legoland Hotel, especially with kids around 10 and under. It has so many clever, fun touches.

That being said there is also the Legoland Beach Resort and several nearby hotels (although none are truly within walking distance so you probably want to have your own car if you choose those).

Alternatively, if you want to just stick to one day, you can easily just drive (or taxi/Uber/Lyft) down to Legoland and come back as a day trip Disney/Universal. 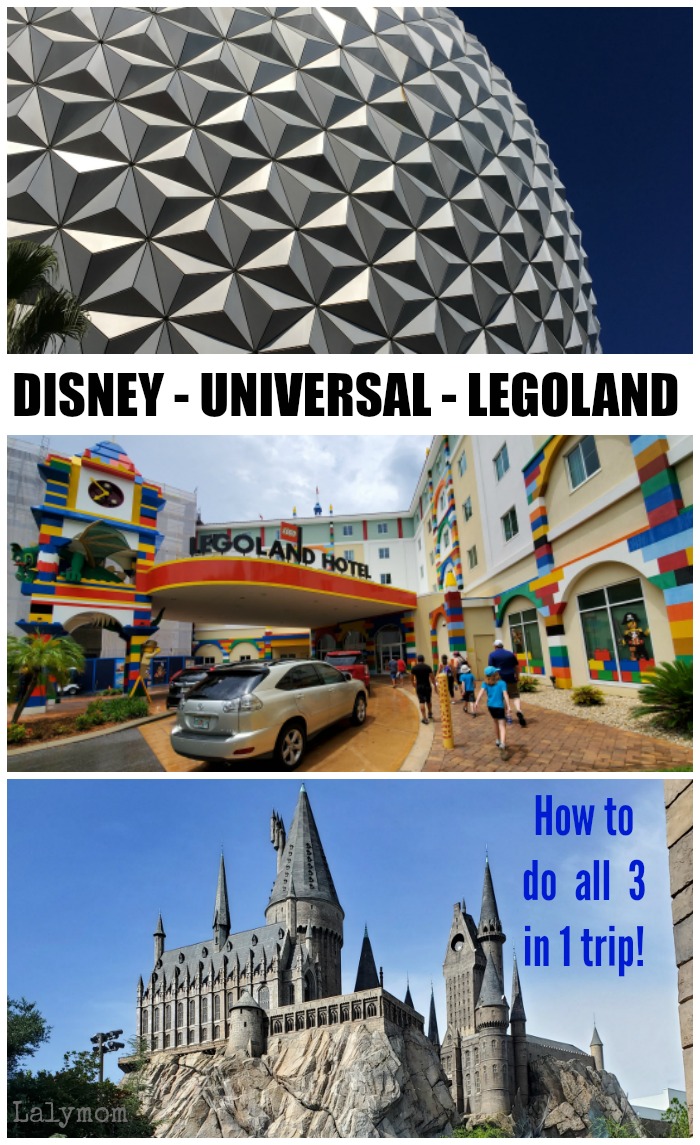 Where to stay for Disney/Universal

The really hard part for us was figuring out where to stay for Disney/Universal.

As noted above, we could stay off site in a condo/house, stay at each place or pick one place and travel in between.  There are pros and cons to each. Here is how we see it:

In the off-property/on-property world, we are big fans of staying on property.

Staying off property also has its pros and cons:

Given all of that, we have always decided to stay on property.

We considered just staying at one place for this trip, but since we were planning 3 days at each, the going back and forth was going to get to be a burden (and expensive) plus we’d lose out on the “perks” for staying on site at each.

We previously stayed at Animal Kingdom Lodge at Disney, when the kids were a little younger because of the animals, and we really like it there, despite it being farther from the parks.

This time at Disney World, we went for maximum convenience and stayed at the Boardwalk Inn. Our room was surprisingly large, although the theming of the hotel was nothing special. Having the Boardwalk to roam was nice and pretty. The real magic at Boardwalk Inn is being to walk a very short distance to a special back entrance to Epcot, and walk right in with barely a line. It was unbelievable to be walking around Epcot and hardly even see another person around us! The other parks were also easy to access, although not QUITE so close.

At Universal we stayed at Leows Royal Pacific, which is a very modern, upscale property with a island theme. Next time we would probably stay at Portofino Bay, which we visited for dinner one night. Royal Pacific is gorgeous but we liked the restaurants better at Portofino Bay.

But the Express Passes made the on-property choice totally worth it here. We found it very easy to get to the parks from Royal Pacific as well.

What’s the Order for a Disney, Universal, Legoland trip?

So we were settled on it then, we’d stay in 3 different places, one at each park.  Now, in what order do we want to do them?

There is probably no wrong answer.

For us one “anchor” we had was that we wanted to start or end with Disney World largely because using Disney’s Magical Express (the shuttle service to/from the airport, complimentary for those staying on property) would save some money, and is super convenient.

Ultimately we decided to start with Disney, end at Universal (the closest place to the airport). We added Legoland in between but you could mix it up.  Given the distance from the airport, Legoland is a little more difficult to do at the beginning or end (a long drive to start or end the trip) but it is doable.

One other consideration are weekends and crowds.

We are huge proponents of using crowd calendars to plan for the times you are planning on going.

There are lots, including the website where we always buy our Disney tickets, Undercover Tourist (free) and TouringPlans.com (some free features, some paid, but totally worth it for planning).

Generally speaking, I feel like Disney World is a little less sensitive about weekends v. weekdays.  Typically, people going to Disney World are there for more than just a day or two so the crowds spread out.

Legoland has a lot of local visitors so avoiding the weekend helps a lot (or go in mid-August when we did. We arrived the day after the Florida schools start and it was really, really empty, albeit hot).

Also, just as a shout out to the Disney staff.  Yours truly, the master planner, bought our tickets from a third party site [future link] but forgot to book for Disney’s Magical Express and didn’t realize it until less than a week before we left.  I called Disney and they not only got me booked in time but they did an express order on our bag tags and our MagicBands and we got them in a couple of days, well before we left (those people are great, seriously).

Other Considerations for planning a trip to Universal Studios, Disney World and Legoland

The biggest other consideration is whether you work in rest days to your schedule.

Our itinerary above doesn’t have any explicit rest days but really, we had two kind of worked in.  For Disney, going “only” 3 days, we were already shorting ourselves a park (we chose 3 of the 4) so we didn’t have one there.

At Legoland we really didn’t need 2 full days so we planned on one full day and another where we’d maybe hit the highlights again or things we missed or just have some hotel time (we also got a buy 1 day, get one day promo so it didn’t cost anything additional).

For Universal we had 3 days planned with 2 parks and had tickets for all 3 days (on a 3 days for 2 offer) and the park-to-park “hopper” ticket so we had at least one day built in that would be a “bonus” day (which really worked out well because my daughter and I both got some type of stomach flu on the trip on different days and we really needed the flexibility).

This was a BIG trip, and ultimately pretty ambitious. But it was also one of the smoothest vacations we have ever taken. And we love to travel.

Between taking advantage of on-property perks, mapping out FastPasses at Disney, maximizing Express Passes at Universal, skipping the very latest rides with excessive wait times (Hagrid at Universal, for us), and planning our trip for a lower attendance week, we barely waited in any lines at any of the parks. It was pretty incredible!