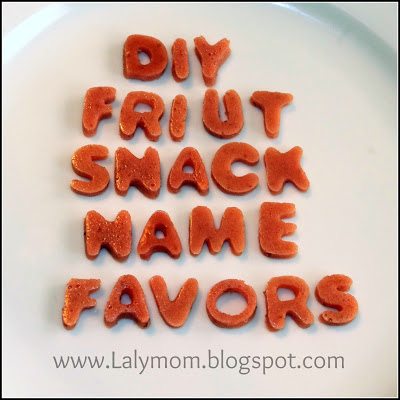 I am always on the lookout for party favors that are not junk or candy. This year for Ladybug's birthday we had…what else…a ladybug garden party theme. An idea had been slowly forming in my head ever since I saw a picture from this post about the healthiest gummy bears you will ever eat. The pictures of these gummy bears are somehow captivating to me and I really like that she offers so many recipes. I thought it would be fun to make some of these snacks as treats or favors for Ladybug's party instead of candy.

I was on the lookout for small cookie cutters or maybe candy molds with ladybug or garden shapes and had not found any I liked. Randomly we were at Joann fabrics and wandered down the Wilton aisle. I found a cute set of fondant cutters with flowers and butterflies but no ladybug. They also had a set with just flowers in various sizes. I was pondering to myself when I thought I'd ask the guest of honor what she thought. She saw the alphabet shape set and said, “Well…Mommy…how about the letters?” So I said, “…….Yes, how about the letters?!” With a whole set of letters we could cut out the fruit snacks in the letters of each kid's name! GENIUS! Okay so it doesn't have much to do with a Ladybug Garden Party…unless you figure fruit can be grown in gardens…but I went with it!

Cutting up the fruit and blending is something you could easily do with kids and I really should have included Ladybug. She loves cutting fruit and would have enjoyed it. Alas, the time I had planned to whip them up was during naptime. And whip them up, I did. It was a really fast and easy process. I was able to prep the next batch as I was simmering the current one.

I used her basic recipe ratios and process the first time around:

I'm not going to print the process, I would rather you go check out her awesome post. She clearly put a lot of work into it and there are a lot of combinations for inspiration. Not to mention the pictures are great, as are all the reader comments.

I will comment on my results though and how I tinkered with the recipe. 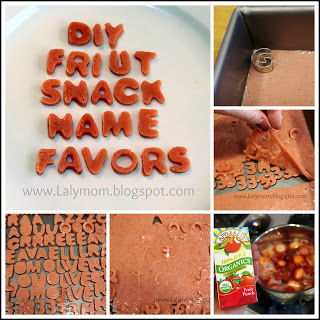 As I said above I didn't freshly squeeze any juice. I think it would add a layer of taste to them but I was on a tight timeline. I did use “fresh squeezed juice” in a bottle from Mariano's produce section, though so it was close. I read comments on her blog saying that some were more tart and since I was going for a kid audience, I did some of the fresh squeezed citrus juice and some with apple juice, for added sweetness. This batch was decent (and better than store bought, in my mind) but wasn't intensely fruity and I felt was kind of more gelatin tasting than I had hoped (although it was the closest to actual fruit snacks and gummy bears in terms of texture). 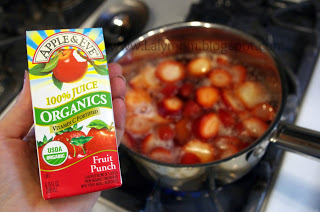 After tasting the first bunch and thinking I had too much gelatin, I adjusted it down for the next try, looking at my blender to see how much puree I had and adding one packet per cup of liquid in the blender. I also did one with frozen mixed berries from Costco and I switched from apple juice to 100% juice fruit punch to amp up the fruitiness. The strawberry batch came out pretty well this time but they were a little less sturdy due to the lower gelatin content. Still, they cut out well and tasted pretty good. The flavor of the mixed berry one was my favorite BUT it had a lot of seeds and could have used more gelatin. They held together through cutting and handling but barely.

In conclusion…Next time instead of the fruit punch (which was decent) I will try one of the fruit nectars found in glass bottles in the international section of my grocery store to boost the fruitiness even more. Additionally I think I'd go with one packet of gelatin per cup of liquid PLUS one more packet. For me this would have been 3-4 packets, not the 5 in the recipe. However, it's to each, his own and the basis of the recipe is awesome, in my opinion. 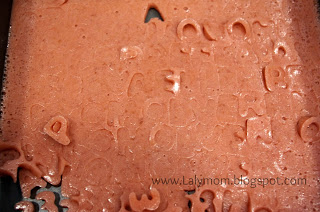 These adorable Wilton alphabet fondant cutters were pretty fun and not as fiddly to work with as one would fear. These are not jello jiggler/cookie size letters, they are very small…3/4 inch…just right for a fruit snack/gummy bear thing.

I poured my fruit juice mixtures into a non-stick metal lasagna type pan, a non-stick metal pizza pan and a glass lasagna dish…I preferred the metal pans when it came to cutting. What I found easiest was to let the poured mixture set up as directed and, while still in the same pan, I pressed out all the letters all in a row. Once I punched them all out I then peeled the excess off which left behind the letters sitting in the pan… as if you were peeling the paper off around stickers, leaving the stickers on the backing. This was there the differences in the amount of gelatin really showed. The more gelatin, the easier it was to peel. The mixed berry ones took way longer but were worth it!

As for depth…at first I wanted to make a thick (or deeper) batch, thinking more along the lines of a gummy bear but a 1/4 inch deep was really pretty optimal for me. One of my batches set up unevenly so I got to try thicker ones and they just weren't as good. Thinner was better!

Also, I was tempted to try to fit as many letters in as tight as I could to eliminate waste but I will say that peeling them was much easier when I left a little space between each letter. I also ate a lot of excess fruit snack during the process! 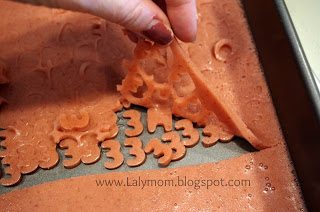 I did three of each child's name in each flavor (oh I tossed the banana batch) and it was enough to fit in the 8 goodie bags with some left over. I cut some into number 3's since it was ladybug's 3rd birthday and the rest I cut into squares and we snacked on them during the week. Ta-da! DIY Fruit Snack Name Favors!

Other Fruit Snacks from Around the Web

Mama Papa Bubba uses whole fruit to make a cute fruit snack garden.
A Little Dancer shows us how to make some with and without fruit.

I hope you enjoy these little fruit snacks and make some of your own! Might as well pin a picture to remember! Please follow along over on our facebook and pinterest pages, we'd love to see you again! 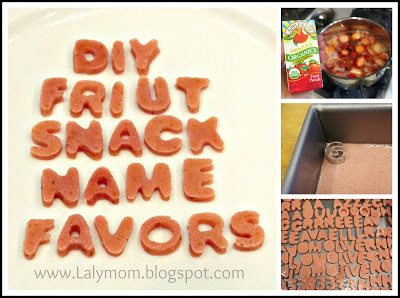 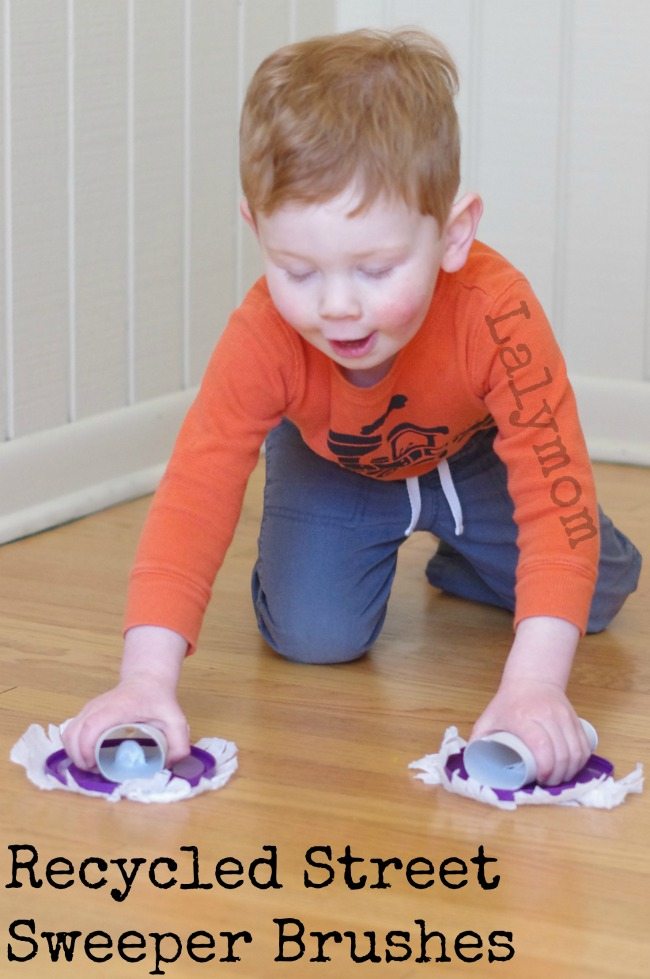 Happy Fine Motor Friday! We are back with playful ways to get kids’ hands moving! Today’s DIY Toy is not only another one of our Recycled Crafts but is great to work on wrist extension and bilateral integration. Note- I did add a couple affiliate links to this post, which just means that if you…

So I have my own blog. Here it is. Why did I start a blog? Because I’m obsessed with sewing. I am looking forward to posting pics of my handiwork. I am still new to sewing, so I’m no master, but it’s fun and that’s what counts! Know any good sewing sites? I’d love to… 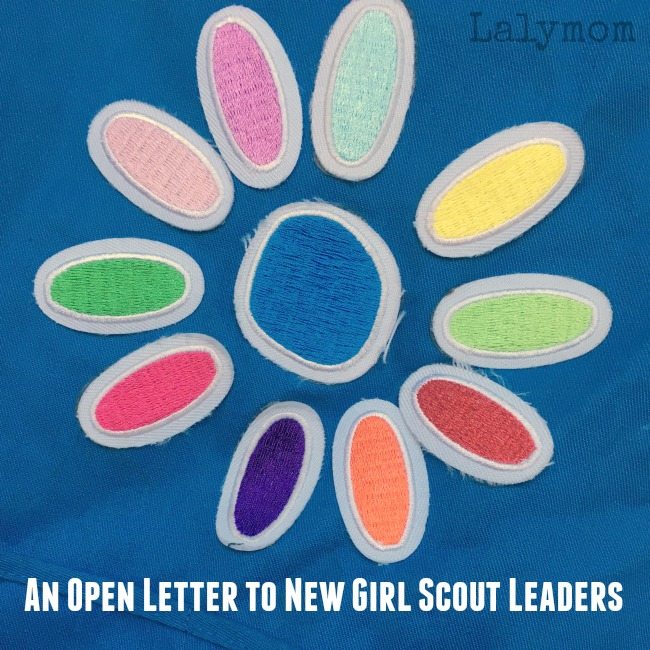 Today I’m sharing a letter to new Girl Scout Leaders in hopes of talking other new, possibly overwhelmed Brownie and Daisy Leaders off the ledge. There are a couple affiliate links in this post too. This open letter is to any Girl Scout Leader out there who signed up to help, just expecting to contribute some… 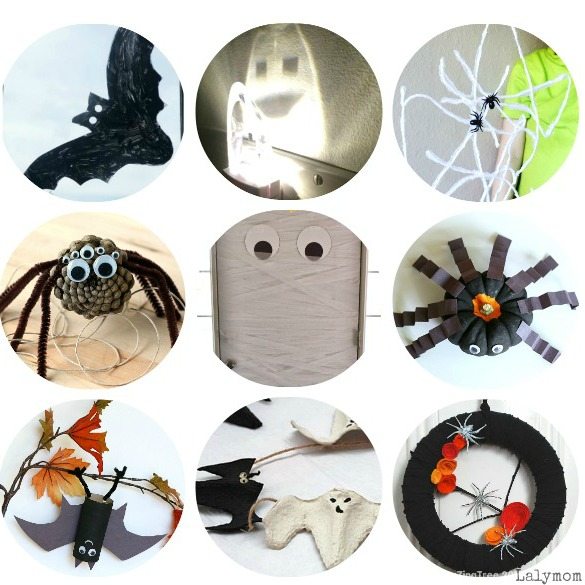 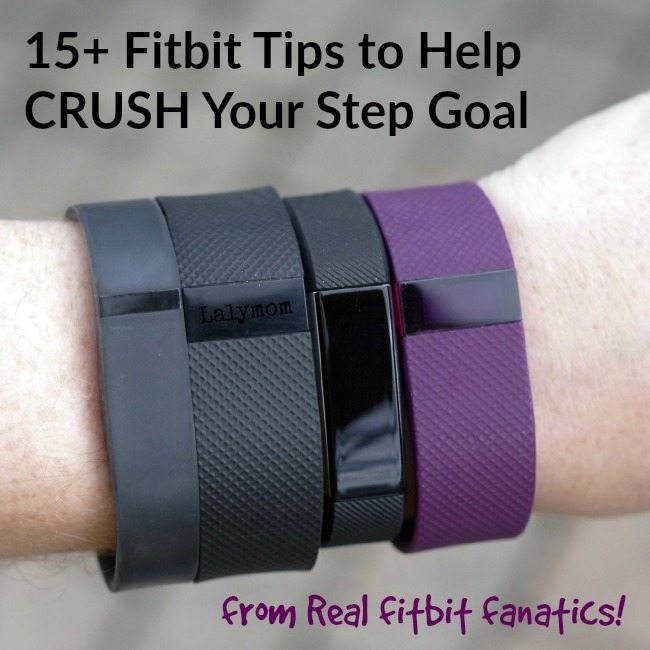 Today I am sharing real-life fitbit tips to help you hit your step goal. These are from actual fitbit fanatics, so you know it’s the real deal! Affiliate links are used in this post. Hello Fitbit Friends! Welcome back and thank you for visiting Lalymom for another batch of fitbit knowledge! If you have caught the… 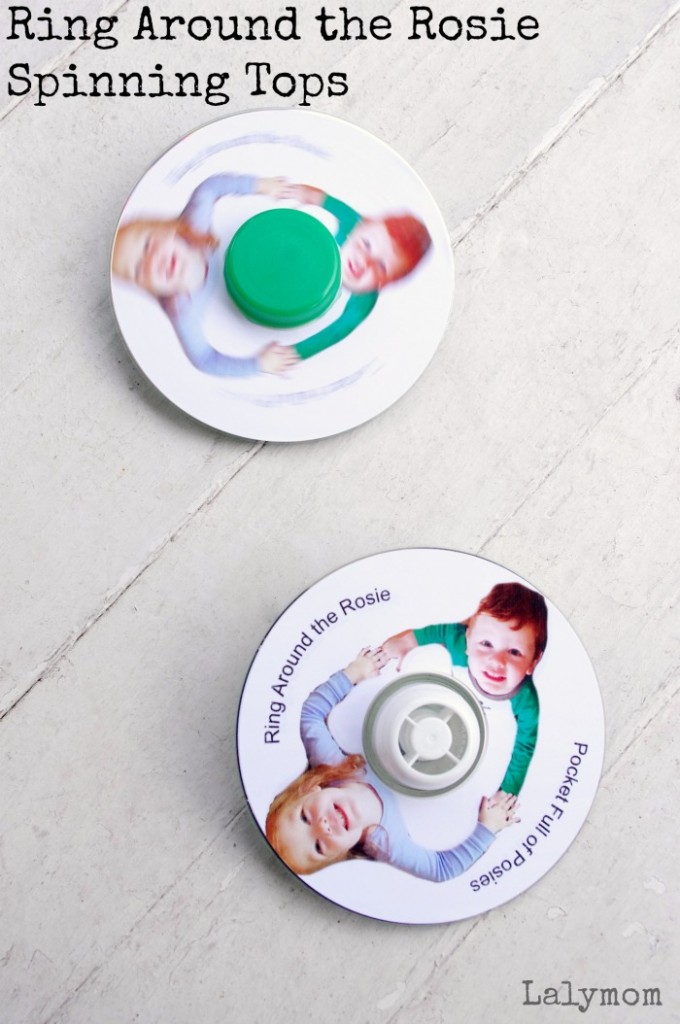 Did you know this week is World Nursery Rhyme Week? Fun right? We have had fun in our house with our book related activities and nursery rhymes fall in that group for us, since we most often read rather than sing our nursery rhymes. Today I have another DIY Toy to go with a nursery…